The views and opinions expressed within these insights are those of the authors and do not necessarily reflect the official policy or position of Doughty Street Chambers.
All Posts Subscribe
April 28, 2020 | 3 minutes read

An Inquest is not a foregone conclusion, since death by prevalent disease will not necessarily be considered "unnatural".  There is new guidance issued today (28 April 2020)  by the Chief Coroner as to the circumstances in which in Inquest will be appropriate.  At least report to the coroner is required where the death results from workplace conditions:

4. The vast majority of deaths from COVID-19 are due to the natural progression of a naturally occurring disease and so will not be referred to the coroner. The Chief Coroner would like to remind coroners of the Ministry of Justice Guidance on the Notification of Deaths Regulations 2019 which provides:

“24. A death is typically considered to be unnatural if it has not resulted entirely from a naturally occurring disease process running its natural course, where nothing else is implicated.”

5. Death due to COVID-19 is designated as notifiable under the Health Protection (Notification) Regulations 2010, meaning that any death resulting from the disease must be notified to Public Health England. This has no bearing on whether such a death is reported to a coroner, still less on whether a death would be the subject of a coroner’s investigation. The death may also sometimes be notifiable to the Health and Safety Executive (‘HSE’) under the Reporting of Injuries, Diseases and Dangerous Occurrences Regulations 2013 (‘RIDDOR’). Regulation 6(2) of RIDDOR requires a report to be made where “any person dies as a result of occupational exposure to a biological agent”. The expression “biological agent” includes the virus

6. Regulation 3(1)(a) of the Notification of Deaths Regulations 2019 provides that there must be a report to the coroner if the medical practitioner completing the Medical Certificate of Cause of Death “suspects that the person’s death was due to... (ix) an injury or disease attributable to any employment held during the person’s lifetime.”

7. There are therefore some instances in which a COVID-19 death may be reported to the coroner, such as where the virus may have been contracted in the workplace setting. This may include frontline NHS staff as well as others (e.g. public transport employees, care home workers, emergency services personnel).

9. If the medical cause of death is COVID-19 and there is no reason to suspect that any culpable human failure contributed to the particular death, there will usually be no requirement for an investigation to be opened. The coroner may carry out reasonable pre-investigation enquiries under s1(7) to determine if there is any basis for opening an investigation

10. If the coroner determines that the duty is not engaged then as usual he or she would notify the Registrar by way of Form 100A (i.e. that he or she has made preliminary enquiries and has established that he or she is not under a duty to investigate the death under s1). If at any stage he or she wishes to revisit this decision, such as because further information about the death is provided, then he or she can properly do so without recourse to the Chief Coroner (see Chief Coroner’s Guidance No.33 – Suspension, Adjournment and Resumption of Investigations and Inquests).

11. A death must be investigated and must usually be the subject of an inquest if the coroner has “reason to suspect that... the deceased died... [an] unnatural death”. In this context, the words “reason to suspect” reflect a low threshold test; lower even than a prima facie case and requiring only grounds for surmise.  However, it is a matter for the coroner’s judgement in each case whether the facts and evidence in the particular case provide “reason to suspect” that the death was unnatural. A death may be “unnatural” where it has resulted from the effects of a naturally occurring condition or disease process but where some human error contributed to death.

12. Accordingly, a death which is believed to be due to COVID-19 may require a coroner’s investigation and inquest in some circumstances. For instance, if there were reason to suspect that some human failure contributed to the person being infected with the virus, an investigation and inquest may be required. If the coroner decides to open an investigation, then he or she may need to consider whether any failures of precautions in a particular workplace caused the deceased to contract the virus and so contributed to death. Also, if there were reason to suspect that some failure of clinical care of the person in their final illness contributed to death, it may be necessary to have an inquest and consider the clinical care. If the person died in state detention (e.g. in prison or secure mental health ward), an inquest would have to take place.

13. In the usual way, it is a matter of judgment for the individual coroner to decide on the scope of each investigation... 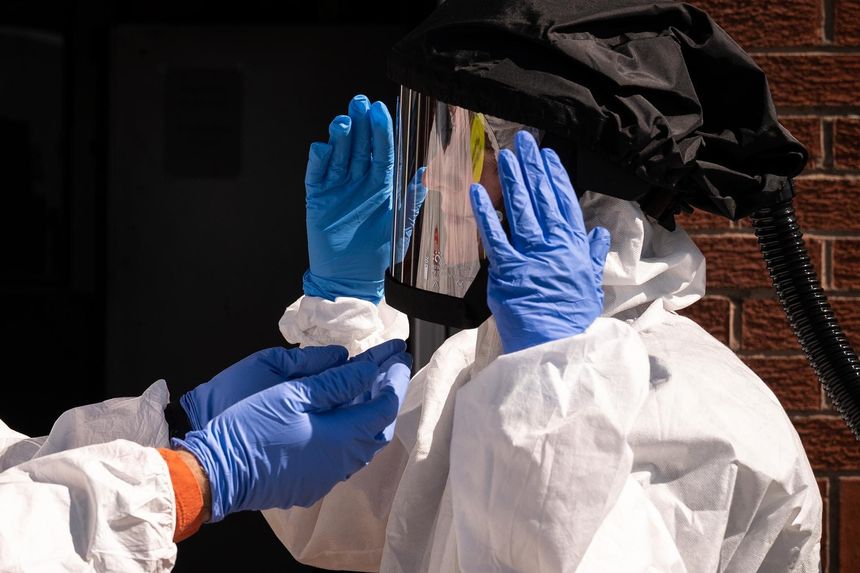