The views and opinions expressed within these insights are those of the authors and do not necessarily reflect the official policy or position of Doughty Street Chambers.
All Posts Subscribe
December 7, 2019 | 5 minutes read

Today, members of the Maltese community in London and free speech organisations organised an event to show solidarity with Daphne Caruana Galizia and campaigners in Malta, and to call for #JusticeforDaphne and #JusticeforMalta.

I was privileged to be asked to join the speakers today, alongside those who have done so much on these issues over the past two years: both authors of Murder on the Malta Express: Who Killed Daphne Caruana Galizia?, blogger and activist Manuel Delia and journalist John Sweeney; RSF’s UK Bureau Chief (and free speech campaigning powerhouse) Rebecca Vincent; and Maltese lawyer Matthew Mizzi (who spoke incredibly powerfully).

Here are my notes of my remarks - they may have come out slightly differently as I spoke without notes and had an unscheduled interruption from an amp, but this is the core of the message.

We stand in Parliament Square in London, surrounded by statues of great thinkers and contributors to democracy and human rights (Mahatma Gandhi, Nelson Mandela, Winston Churchill). There is one lone woman commemorated amongst the many men: trailblazing, determined, changemaker Millicent Fawcett.

She holds a sign saying “courage calls to courage everywhere” words she wrote after the death of suffragette Emily Davison. Words that speak of the selfless acts of others fighting for a cause, and the personal pain and loss which may lie behind societies being shaped to become more equal.

Today I want to talk about some different types of courage which I have seen in the two years and two months since Daphne’s assassination.

First - the courage of Daphne’s family.

Over the past two years, I have had the privilege of representing Daphne’s family - her husband Peter, her sons Paul (who is here today), Andrew and Matthew (working with a superb team of international and Maltese lawyers, based between London and Valletta).

This incredible family has shown true courage and grit in the most horrendous of circumstances, over two years of fighting for accountability and truth.

Every single stage has been a battle. They have had to fight for every single basic entitlement which is their right under the law.

It took one year and a battle through the courts in Malta to secure a police chief to oversee the criminal investigation not tainted by suspicions of bias. A fight this family should not have needed to have.

It took two years and further protracted legal arguments to secure the public inquiry which is their right under the European Convention on Human Rights, which opened yesterday. An investigation which should have commenced in October 2017, not in December 2019. An inquiry considering whether Daphne’s assassination was preventable and whether the State contributed in any way to her death. An inquiry which the Maltese government was eventually shamed into triggering, after criticism from the Parliamentary Assembly of the Council of Europe, the European Parliament, NGOs, and the family having to resort to a legal battle when their requests for a public inquest were repeatedly rebuffed.

And courage during the extraordinary developments in Malta over the past few weeks, some of which left her son Andrew describing feeling “sick with anger” as it became apparent that responsibility for her murder may lead right to the heart of government, and that same government may have had involvement in the criminal investigation which compromises its integrity.

Second - the courage of Daphne.

I never met Daphne, unlike many of you here who knew her personally, but I have had the privilege over the past two years of getting to know her through her sons who have picked up her journalistic baton. And I have got to know her through reading her brave investigative reporting, her searing, no nonsense, vital writing, uncovering corruption, putting her head above the parapet when others did not, and speaking truth to power. She was a remarkable woman: the first woman to write a political column in Malta; the first to write in her own name, not anonymously; and she broke every major story since 1988, aged only 24, the year when her youngest son Paul was born and she was a mother of three very young boys.

I learn more about her from her witty and frustrated responses on MP Glenn Bedingfield’s misogynistic and insulting blog, which encouraged people to post photos of Daphne doing her grocery shopping and drinking coffee.

And I learn about her from reviewing the three decades of threats she received simply for doing her job - arson attacks, death threats, pets killed, attacks online and in the streets, assets frozen, libel claims brought against her by businessmen and politicians. “It feels like they’re trying to fry me alive,” she told Matthew, he testified yesterday. What happened in October 2017 was a logical extension of the many other ways the powerful had attempted to silence her. The ultimate form of censorship.

These threats were known. Daphne described them in an interview with the Council of Europe only 10 days before her death. “They have made me into a national scapegoat” she said, comparing herself to the women persecuted as witches in the 17th century, portrayed in Arthur Miller’s play The Crucible.

Was this a preventable death? These risks were known. Did the State take appropriate steps to minimise the risks to her and prevent the risk to her life? Did the State allow it to happen? And now, given recent events, we also must ask if the State had direct involvement in her death.

Over the past two weeks, much of the rhetoric internationally has involved sidelining Malta, considering it a pariah state within the EU and the Council of Europe. ‘How could this happen under our noses?’ is the implied question.

In many ways, Malta should be a pariah, and it is clear that root and branch reform is needed.

But the truth is that this happened under our noses because we let it.

The risks were known before Daphne’s death. The corruption was known before her death - she reported it. The risks to her were widely known, and she had documented them days beforehand.  The constitutional shortcomings and the absence of checks and balances have certainly been clear for a year, since the December 2018 Venice Commission report.

This is not just a Maltese issue. An issue in the distant reaches of  Europe. This shames us all.

Today, I am speaking in London. London law firms harassed Daphne before her death with multiple defamation claims. Overnight, I read reports that a London PR company, Chelgate, did Muscat’s dirty work after Daphne’s death; the Maltese government paid lobbyists to defend their image in EU capitals whilst the investigation into her death was ongoing, and they defended Malta in a House of Commons committee inquiry, a building just across from me as I speak. (See the shocking report on Chelgate‘s work with the Maltese government by Andrew Rettmann, EUObserver, here). 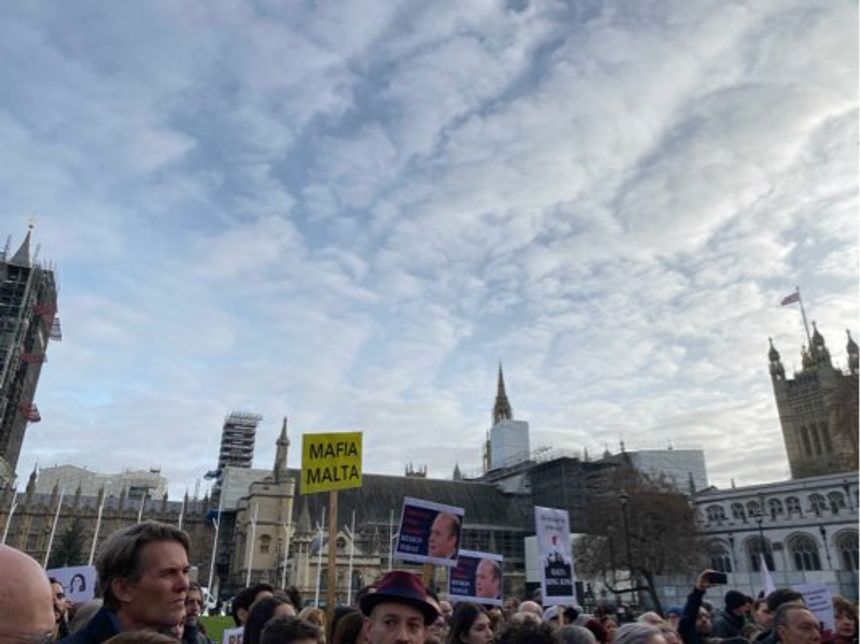 London’s Maltese community singing the country’s national anthem to conclude today’s protest. May #Malta’s legacy be the courage of its people who did not give up in their fight for justice for #DaphneCaruanaGalizia against great odds - not the actions of a corrupt few. pic.twitter.com/huBlyheF1H

Today, an event calling for #JusticeforDaphne took place in Parliament Square. We spoke by the Millicent Fawcett statue, a lone trailblazing woman amongst the men. A fitting place to pay tribute to Daphne & her family, & call for change in #Malta. #Couragecallstocourageeverywhere pic.twitter.com/fqXfqBocJh

Please read what he has to say here.

It’s what we’ve lived through for years, but still staggering to read. https://t.co/xuNdFg8tnv

Read the impressive testimony of her son @mcaruanagalizia today.
A first and necessary step to find truthhttps://t.co/YQMlH4hqLE