The views and opinions expressed within these insights are those of the authors and do not necessarily reflect the official policy or position of Doughty Street Chambers.
All Posts Subscribe
November 19, 2020 | 4 minutes read

“Children and young people are not just the future. We are right here, right now.”

The UNCRC (Incorporation) (Scotland) Bill, which was introduced to the Scottish Parliament in September, “is a bright ray of sunlight in what has been a gloomy year,” said Bruce Adamson, Scottish Commissioner for Children and Young People, delivering Doughty Street Chambers’  Annual Children’s Rights Lecture on 19th November 2020.

“It is the most important piece of legislation to come before the Scottish Parliament in the 20 years since devolution.”

Bruce delivered the annual lecture to mark Universal Children's Day alongside one of his young advisors, 15 year old Beccie White. They spoke about the pending full and direct incorporation of the UN Convention on the Rights of the Child (UNCRC) into Scottish law, as well as the pressing need to encourage such advances in other parts of the UK.

The event was chaired by former Supreme Court justice, Lady Hale, and was followed by a panel discussion with Professor Simon Hoffman of Swansea University; Anmol Kaur Singh, a children’s rights activist; Shu Shin Luh, a public law practitioner at Doughty Street Chambers; Professor Aoife Nolan, Co-Director of the Human Rights Law Centre at the University of Nottingham and co-lead of Doughty Street Chambers' Children's Rights Group; as well as a contribution from Louise King, Director of the Children’s Rights Alliance England (CRAE).

Bruce Adamson, who described his role as Scottish Commissioner for Children and Young People as “the best job in the world”, said that Brexit is changing the UK’s domestic legal protections and “technological change is bringing challenges as well as opportunities for human rights.” But although across Europe there has been “an increase in retrogressive attacks on human rights”, young people are “leading climate justice, anti-racism and anti-misogyny movements which are highlighting the failures in our current approach.”

Beccie White, who works as a young advisor to the Scottish Commissioner and is a Member of the Scottish Youth Parliament, described Scotland’s journey towards full incorporation of the UNCRC into Scottish law. “A few years ago, we didn’t think we would incorporate the UNCRC in Scotland,” she said. “But things can change.”

After a a long-running campaign for the incorporation of the UNCRC by children and young people and civil society organisations, the Scottish Government has now committed to fully and directly incorporate it into domestic law by early 2021. “Full and direct incorporation is going to make rights real for children,”  said Bruce.

Scotland will be following in the footsteps of Norway, Finland, Iceland and most recently Sweden, which have incorporated the UNCRC into their national law in varying ways. The Bill represents “a new era in protection and fulfilment of children’s rights in Scotland” and will make it unlawful for public authorities to act incompatibly with the UNCRC, making many of the rights protected by the UNCRC fully justiciable for the first time.

Reflecting on what the rest of the UK can learn from Scotland, Bruce and Beccie spoke of the many children and young people who were involved in the campaign, and the importance of them leading the process. “There was a clear call from them that their rights have to be enforceable and not just optional”, said Bruce. He added:

“There is a democratic deficit. Children don’t have the same political power as adults, nor do they have the same economic power to influence or lobby, and systems of redress are difficult to access. It is incumbent upon all of those in power to make special efforts to ensure that children’s voices are heard in all decisions that affect them, and this requires a change in the way that decisions are made.”

15 year old Beccie echoed his words, saying “children and young people are not just the future – we are right here, right now.”  Too many times during the Covid-19 pandemic children have seen a return to “a paternalistic approach which failed to see them as rights-holders”, she said, naming this summer’s “exams fiasco” as an example.

As for the role of adults in the process, Beccie thought this was to “empower children to understand their rights and what incorporation means; and to allow them to support the calls for it.”

If the rest of the UK is to make the same progress, they will have to “overcome the tendency of Governments to overcomplicate things to the point of inertia,” said Bruce. To that end, the work of advisory groups is “essential” – to demystify the process for Governments, and speed up the pace of change.

Beccie concluded by calling on all decision-makers and law-makers to pledge full and direct and incorporation:

“We must fix the democractic deficit. We must all promote, protect and defend children’s rights. The time for implementation is now.”

During the panel discussion after the lecture, Professor Simon Hoffman of Swansea University described Scotland and Wales’ “leadership on children’s rights in the UK” and said that devolution provided an advantage in this regard. Although Wales has not incorporated the UNCRC, the Rights of Children and Young Persons (Wales) Measure 2011 “seeks to promote a proactive approach to children’s rights”.

Anmol Kaur Singh, a young children’s rights activist who described the years she spent living in unsuitable temporary accommodation with her mother as a child as something she “will never forget” thought that incorporation of the UNCRC in England would have helped her at that time; and that it would enable young people to “struggle less”.

CRAE's Louise King explained that a key obstacle to children's rights campaigning is how far down the political agenda children are - in part due to the lack of incorporation of the UNCRC.

Shu Shin Luh described a “deficit”  in English law by the country’s failure to incorporate the UNCRC.

Professor Aoife Nolan agreed, and argued there is a need to push for UK-wide, domestic incorporation of the UNCRC.

Summing up after the lecture and panel discussion, Lady Hale agreed that England has much to learn from Scotland and Wales. She also reflected that “children’s rights are not the same as children’s welfare. Children’s rights look upon children as agents, not mere recipients of other people’s concern for them.”

Lady Hale concluded: “The greater concern we have for children and young people’s rights, the better it is not only for them but for us grown-ups too – they are our future as well as their future.”

“We celebrate the 75th anniversary of the United Nations and 31 years of the UN Convention on the Rights of the Child in the middle of a global pandemic which has disproportionally affected children whose rights were already most at risk, including disabled children, care experienced children and children impacted by poverty.” 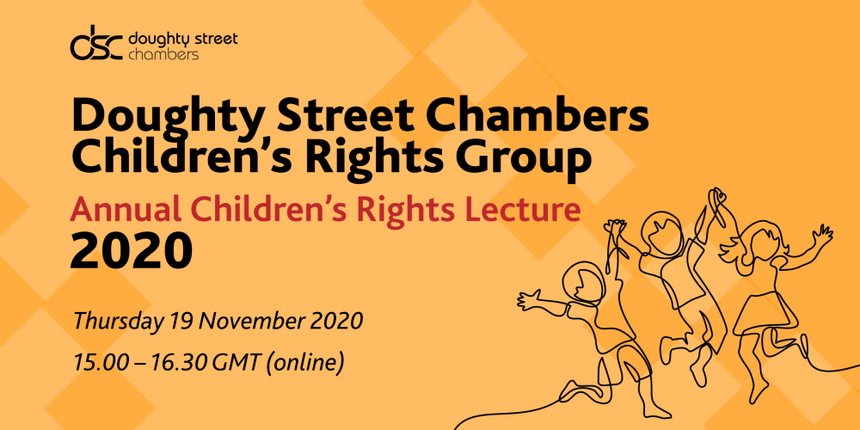 Fantastic presentations from young people at today's #ChildRightsDSC event including how incorporating the UNCRC into English law will give children power to fight for their rights and @BeccieWhiteMSYP on how young campaigners were central to incorporating the CRC in Scotland 👏 https://t.co/3Ctpv0bTFD

No incorporation of the #UNCRC means that children are invisible in policy-making, which has been particularly stark during the pandemic with for ex the adoption of controversial social care regulations without proper consultation or analysis of impact on children #ChildRightsDSC

Listening to the excellent @Bruce_Adamson and Beccie White. Incorporation of the UN CRC is possible. #ChildRightsDSC