The views and opinions expressed within these insights are those of the authors and do not necessarily reflect the official policy or position of Doughty Street Chambers.
All Posts Subscribe
July 29, 2020 | 5 minutes read

"Slow, inconsistent and, at times, negligent"

Today, the House of Commons Public Accounts Committee published a highly critical report on "Readying the NHS and social care for the COVID-19 peak".

The committee has 16 members, nine of whom are Conservative party members, and is chaired by Labour's Meg Hillier MP. On 22 June, it took oral evidence from senior civil servants from across the various agencies including Public Health England (PHE), NHS England and the Department of Health and Social Care (DHSC). A record of the oral evidence is here. It also considered written submissions. Today it published its 21-page report.

The report uses ferocious language in setting out six conclusions and recommendations:

This has resulted in "confusion and poor central control over critical elements of the pandemic response". While it was clear that the NHS had responsibility for securing beds, oxygen and ventilators to treat patients, "it was unclear who was leading on the social care response". The report noted the "frequent reports of of the lack of timely testing", "inadequate provision" of PPE and "numerous updates to PPE guidance". In the "fragmented system of adult social care", responsibilities are spread between central government local government and care providers. DHSC officials who gave evidence to the committee acknowledged that this had made it “considerably more difficult” for government to take action.

2. Discharging patients from hospital to care homes without testing them

Until 15 April, the government's policy was not to test patients being discharged into care homes. This, the committee said, was "an appalling error". PHE confirmed to the committee that by late March that the infection had an asymptomatic phase when people could be infections without being aware they were sick. After discharging 25,000 people from hospitals to care homes between 17 March and 15 April, the DHSC finally confirmed a new policy of testing everyone prior to admission to care homes. Between 9 March and 17 May, around 5,900 care homes, equivalent to 38% of care homes across England, reported at least one outbreak. The DHSC told the committee it took rational decisions, but that it would not necessarily do the same thing again.

The committee highlighted its own work going back many years calling for a reform to the social care system, the "NHS's poor relation". It noted that the DHSC only published its action plan for adult social care on 15 April, four weeks after the initial NHS letter on the response. The report noted that "it is simply unacceptable to hear reports of inadequate PPE, lack of testing and insufficient guidance on training." It reiterated the urgent need for reforms to "put social care on a sustainable footing after years of under-funding."

4. Undermining public confidence without an open an honest debate about current capacity and plans

The committee criticised the content of government's decisions, the rationale of the decisions and how the decisions were communicated. It found that "too often the basis for decisions or changes, such as on PPE, has been unclear" and that decisions have "sometimes seemingly [been] based upon what the system could cope with, rather than clinical advice and ‘what was right’, and at other times without regard to the reality on the ground".

The report noted that the committee was "deeply concerned" about care workers who have "endured the strain and trauma" of responding to the crisis for several months. Failure to protect them "has impacted staff morale and confidence, while a lack of timely testing, until after the pandemic had passed its first peak, led to increased stress and absence". The committee called on DHSC and NHS England to put in place measures to support health and social care staff to recover from the impact of the first peak, and monitor and provide ongoing support through to the end of the pandemic.

6. Lack of transparency about costs and value for money

Nightingale hospitals were built and contracts signed with independent providers for an additional 8,000 beds to cope with an expected peak in April and the contract finished on 28 June. The report noted the "scarcity of information on contracts and costs". The committee asked NHS England and Improvement about this, but the organisation "was unable, or unwilling, to provide any estimate of the cost of private sector capacity or the Nightingale hospitals".

The need for an urgent statutory inquiry

This hard-hitting report is likely to be welcomed by the social care sector and by the many thousands of people who have lost loved ones in social care. The Public Accounts Committee has chosen its damning words carefully in saying that the government's approach was "slow, inconsistent and, at times, negligent".

First, the committee's important report addresses many of the salient points, but it took evidence for one day and analysed very few written submissions. At 21 pages, the report barely skims the surface.

Second, the report misses key issues. Any inquiry would, in my view, take a broader approach and drill down into each issue in more depth, It would be cognisant of use international human rights and clinical standards and use them to inform its analysis (I used WHO Europe's policy objectives as an analytical lens in this blog). Issues that the inquiry would need to deal with include (a) tracking the voluminous updates to PPE guidance, (b) analysing the consistency of the government's care home guidance with the WHO guidance, and (c) examining the impact of any inconsistency: for example, the debacle about masks (which I've written about here) and eye protection which has received far too little coverage (I've written about that here).

Third, the report understandably focuses on the national (England) level. It does not drill down into what has happened in any particular local authority, care provider or care home. Although it had a letter by the Chair of the Local Government Association’s Community Wellbeing Board, it took no evidence from any officials from local government.

Fourth, the report does not deal with supported living or home care.

Fifth and most importantly, the Public Affairs Committee had no input from bereaved families. This is not a criticism, it just isn't the committee's role. A statutory inquiry would need to gain the trust of bereaved families and ensure their active participation.

The report calls on the government to "report transparently and consistently on progress". The Prime Minister has already agreed to a public inquiry, just not now. this is the wrong approach. A public inquiry must be established now, with an urgent interim phase to report back in order to save lives.

"Years of inattention, funding cuts and delayed reforms have been compounded by the Government’s slow, inconsistent and, at times, negligent approach to giving the sector the support it needed during the pandemic." 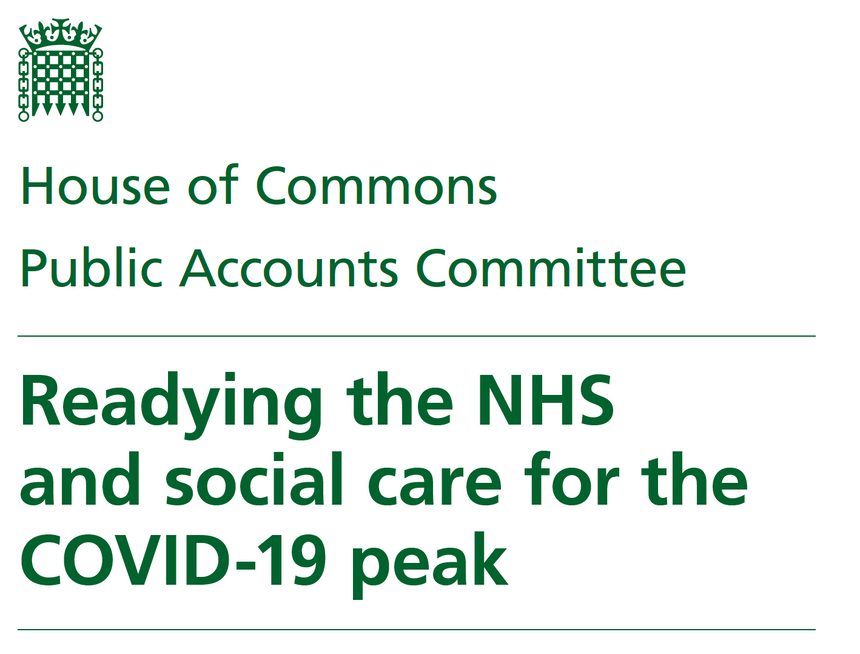 Government accused of a “slow, inconsistent and at times negligent” approach to social care during pandemic – exposing years of delayed reforms to sector.

“Our care homes were effectively thrown to the wolves, and the virus has ravaged some of them".https://t.co/hdaN20hgut pic.twitter.com/LH4MCTHVEO

Today a damning report says it was an "appalling error" to do so, and that support for care homes was "slow, inconsistent and, at times, negligent." New story on the way with reaction and thoughts from those who loved and lost through this awful pandemic. https://t.co/H81TbxCvYd

Cross-party MPs have accused the government of being ‘slow, inconsistent, and at times negligent’ towards #socialcare during the #COVID19 pandemic. @CommonsPAC @Meg_HillierMP @CareEngland @NCFCareForum https://t.co/w04hHparv3

“Our #carehomes were effectively thrown to the wolves, and the virus has ravaged some of them" @Meg_HillierMP
#Covid_19