The views and opinions expressed within these insights are those of the authors and do not necessarily reflect the official policy or position of Doughty Street Chambers.
All Posts Subscribe
November 21, 2019 | 3 minutes read

The lecture was followed by a panel discussion in response, chaired by Lord Kerr, Justice of the Supreme Court, and featuring Doughty Street's Aswini Weereratne QC and Jamie Burton, as well as Solange Valdez-Symonds, Director of the Project for the Registration of Children as British Citizens.

On its 30th Anniversary, Van Bueren asked "What are the new challenges for the Convention on the Rights of the Child?”

Climate change and eradicating child poverty were the two biggest challenges, according to Van Bueren, who helped to draft the UNCRC 30 years ago.  As a junior barrister, she was one of the youngest drafters, but "positively ancient" compared to Greta Thunberg and the 15 other children who recently filed a landmark official complaint to the United Nations Committee on the Rights of the Child to protest lack of government action on the climate crisis.

The complaint was filed through the Third Optional Protocol to the Convention, a voluntary mechanism which allows children or adults on their behalf to appeal directly to the United Nations for help if a country that has ratified the Protocol fails to provide a remedy for a rights violation. "An essential legal tool in child protection", the Third Protocol provides a "valuable safety net" for children, enabling them to bring complaints to ensure that their rights are guaranteed, said Van Bueren. Notably, the UK has refused to ratify the Third Protocol, despite having ratified the Convention itself in 1991.

So, can the UNCRC be effectively used to help combat climate change? "This was not something that was discussed when drafting it," said Van Bueren. "The Convention does not include the words 'climate change' or 'global warming' or even 'biodiversity'."

But the UNCRC is still applicable, she argued. International treaties are designed to be sufficiently flexible; they are "living instruments". What is required to meet the rights of children, said Van Bueren, is more imaginative and positive reading of the UNCRC: "Losing the benefits of a healthy eco-system affects a child's rights to food and clean drinking water", for example.

On how the UNCRC can be used to tackle child poverty and address the "growing inequality between poorer and wealthier children living in the UK", Van Bueren queried why the UK had not yet incorporated the UNCRC into domestic law, as this may help to address the "resistance to using international law to eradicate child poverty".

Van Bueren thought that the resistance from lawyers and judges to protecting the socio-economic rights of children is caused in part by such rights being "wrongly regarded as a radical departure from British traditional approaches".

To meet new challenges, we need to look backwards, argued Van Bueren, pointing out that children's socio-economic rights are not new and do not derive solely from "the global and foreign": they have been rooted in the history of England and Wales since the 13th century.

With that in mind, "the socio-economic rights of children are not foreign," said Van Bueren. "They are English and Welsh", which enhances the case for incorporation of the UNCRC into domestic law, she argued.

"It is useful to have events like to this to remind ourselves of the need to invest in our children as the future inheritors of our planet," said Lord Kerr.

“Thirty years ago, world leaders made a historic commitment to the world’s children by adopting the Convention on the Rights of the Child. Today, the world’s children are holding the world accountable to that commitment,” said UNICEF Deputy Executive Director Charlotte Petri Gornitzka. “We fully support children exercising their rights and taking a stand. Climate change will impact every single one of them. It’s no wonder they are uniting to fight back.” 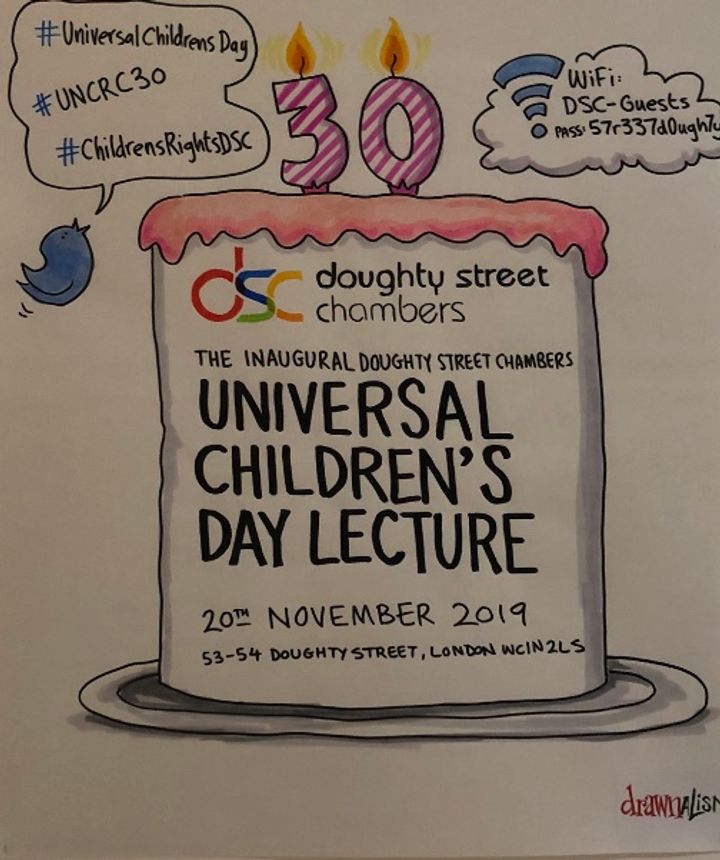 Disappointed to miss fantastic evening with friends & ex-colleagues @DoughtyStIntl to celebrate #UNCRC30. If, like me, you couldn’t be there would recommend this great thread summarising the contributions from #humanrights heroes of #ChildRightsDSC team👇🏽 https://t.co/9w30w77HKu

Prof Geraldine Van Bueren QC spoke about the role of children in holding power to account on #climatechange. The @DoughtyStPublic
audience has seen this brilliant example of Sunday, aged 5, doing just that https://t.co/GemLaLg95f… @hackney_kids #ChildRightsDSC

‘When we feel depressed about how far there is to go, let’s recall how far up the hill we have come in a little time.’ @JamieBurton29 @DoughtyStPublic says #UNCRC is among newest of the rights treaties & needs blue sky thinking. ‘A powerful set of legal crampons’ #ChildRightsDSC pic.twitter.com/Frz66Tjjkp

.@JamieBurton29 touchingly thanks Geraldine van Beuren for inspiring him several years ago to pursue a legal career fighting for economic, social and cultural rights. @ChildRightsDSC pic.twitter.com/FuLCJZrEPR

LOVE this. When drafting the #UNCRC, Prof Van Bueren QC @DoughtyStIntl was told it would have minimal impact,most governments would ignore it,only a handful would ratify it. Now? It’s the most widely ratified international human rights treaty in history. #UNCRC30 #ChildRightsDSC https://t.co/uwSvxtvqoM