Sue Montgomery is a city councillor and borough mayor in Montreal. During city council meetings she has started knitting in two colours: red for when men speak, green for when women speak. The colour-coded result is a huge swathe of red, with some broken, small patches of green. It is a striking visual indicator of what researchers have consistently found: in meetings, men talk far more than women and dominate the airtime. Sue tweeted about her knitting project using hashtags “#reclaiminghertime” and “#listen”, and her tweet has gone viral.

Sue has also pointed out - in answer to questions on twitter - that this pattern is despite there being near-parity in representation on the council (31 women and 34 men).

Sue’s knitting reflects what research has long shown: men tend to talk more than women in meetings and other business-focused contexts. For example, Barbara and Gene Eakins’ work in 1976 analysed seven university faculty meetings. They found that the men spoke more often and for longer than the women, and each of the men interrupted more often than each of the women, even when taking account of the total number of ‘turns’ taken.

Susan Case’s nuanced, careful work in the late 1980s examined the nature of the turns - linguistic and stylistic differences in how men and women make points in professional group settings. She found that men and women managers tend to make different types of contributions in groups: women tending to use a facilitative, personal style and men tending to use a more assertive, authoritative style. She also examined particular strategies, identifying that women tended to use strategies which engaged others more and minimised status differences (such as adding to others’ comments to shift topics, using modal constructions instead of imperatives).

Women and men’s contributions in meetings tend to differ

Other more recent researchers, similarly, have identified that men are more likely to speak in ways which claim attention and gain them credit for their contribution, whereas women are “more likely to preface statements with a disclaimer, speak at a lower volume and try to be succinct so as not to take up more speaking time than is necessary, especially at meetings.” Many women will have had the galling experience of making a point at a meeting only to hear it made later by a man who then gets the credit for it. Famously, in the Obama White House during the President’s first term female officials identified such a pattern and devised a tool to tackle it: “amplification”. After one woman offered an idea, if it wasn’t acknowledged, another woman would repeat it and give her colleague credit for suggesting it.

Identifying and Highlighting the Problem

One key strategy in tackling these problems is identifying them in the first place. A visual tool like Sue Montgomery’s knitting is a superb way to record the problem. Other tools for those of who are not so deft with knitting needles include the straightforwardly titled arementalkingtoomuch.com, a timer which records when the person speaking is “a dude” or “not a dude.” Try it - you are unlikely to be surprised. By identifying the phenomenon accurately, we can begin to address it. Who knows - it may even lead to some men being self-conscious about dominating discussion, and employing inclusive strategies women have long used when they feel self-conscious about speaking up: starting with a disclaimer, drawing on others’ words, being succinct to avoid taking up too much time and being seen to dominate. Let’s keep an eye on Sue Montgomery’s knitting patterns. I hope they change. 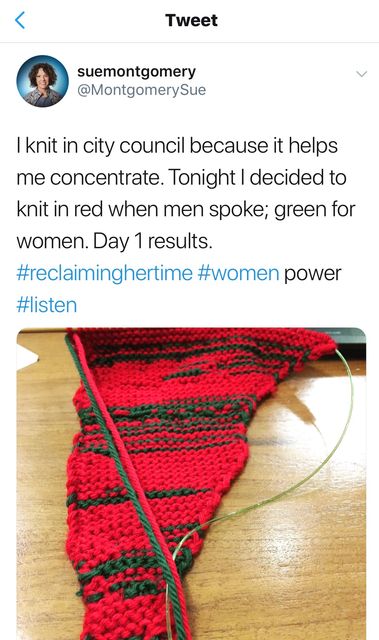 I knit in city council because it helps me concentrate. Tonight I decided to knit in red when men spoke; green for women. Day 1 results. #reclaiminghertime #women power #listen pic.twitter.com/2nc65UB8GZ

This is so smart and funny. What a creative way to call attention to this issue!

I did that, but when they’re talking super fast, it was hard to carry the green along. I ended up breaking it and starting anew a few rows later (when the guy finally stopped his soliloquy)

This hits three things I love - feminism, knitting, and data representation. Absolutely love the work and the exposure of the imbalance. Go, go, you!

Also - did you see this scarf by a German woman who recorded the delays in her train commute in color? https://t.co/1IAiB9I79P

By Adam Straw
By Alice Irving 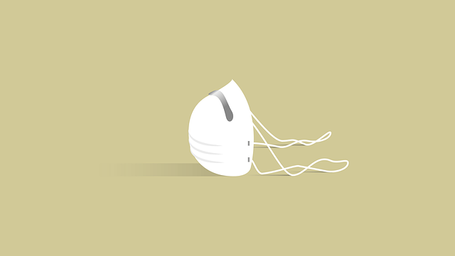