The views and opinions expressed within these insights are those of the authors and do not necessarily reflect the official policy or position of Doughty Street Chambers.
All Posts Subscribe
May 14, 2017 | 4 minutes read

Interviewing children in the care of the State: new guidance for police and security services.

On 4 May 2017, Sir James Munby handed down a little reported judgment where he raised concern that current law and practice on the interaction between police and security agencies and wards of court lacked clarity ([2017] EWHC 1022 (Fam)).

The case involved a teenager who was a ward of court in circumstances where radicalisation was an issue.  He had been approached by the Security Services. Following the approach, the relevant local authority suggested that the consent of the court should have been sought before engagement with the child as a ward.  The local authority expressed concern that without consent, the engagement with the child had been in contempt.

Broadly, Sir James concludes that the requirement for consent before interview of a ward, reflected in Paragraph 5 of PD 12D of the Family Procedure Rules, is not supported in law.  This position would, he reasoned, place wards in a privileged position in relation to other children caught up in the criminal justice process.

Following a close review of the case law and development of the relevant practice directions, the President of the Family Division concluded that this rule stood on "insubstantial" foundations.  It was seemingly inconsistent with the long standing legal principle that wards should not be privileged over other children by virtue of their wardship; nor should a wardship interfere with the capacity of other public authorities to discharge their powers or discretions, in which the wardship court should play no role on the merits (see A v Liverpool City Council [1982] AC 363, Re G; Re R Note (Wards) (Police Interviews) [1990] 2 FLR 347 and this judgment at [20], [40] - [43], [45] [51]).

Closing his judgment, Sir James turned briefly to the position of looked-after children:

Drawing parallels with the treatment of babies in Mother and Baby Units and children in the immigration system, the President of the Family Division reiterated that the powers and duties of other public agencies should not be inhibited by any requirement to seek the consent or consultation of the local authority with parental responsibilities, other than provided by their own statutory frameworks.  Ordinary protections afforded by other general statutory schemes, including the Police and Criminal Evidence Act 1984, will, of course, continue to apply (see at [51]).

Community care practitioners might find the description of the treatment of looked-after children as "privileged" in the law, as rare.  The UN Convention on the Rights of the Child, does, of course, require the UK to give priority to the best interests of the child in public processes, including in contact with the criminal justice system (see, for example, Article 40).  This is reflected in the welfare duty imposed on local authorities and other agencies, including police forces and the National Crime Agency, by Section 11, Children Act 2004.

Sir James is careful to reiterate the interests of the child.  He refers from the outset to his own guidance in Radicalisation Cases in the Family Courts (Oct 2015), which recognises that it is "interest of the individual child that is paramount.  This cannot be eclipsed by wider considerations of counter terrorism policy or operations." (see at [12], citing The London Borough of Tower Hamlets v M & Ors [2015] EWHC 869).

However, he also cites the same guidance, stressing that wardship courts must be alert to the need to ensure that the operational requirements of the police and other agencies are not inadvertently compromised or inhibited by wardship orders or other orders of the family court (see at [43]). His conclusion is that, on the law, the requirements of PD 12D cannot stand: "Radical surgery will probably be required".

In the meantime, the guidance offered is to follow Re G; Re R Note (Wards) (Police Interviews) [1990] 2 FLR 347 (at [50]).  Broadly, if PACE is applied properly, there is no requirement for prior consent of the court before any interview by the police. Following the interview, the Court should be notified by those with charge of the child. Other agencies should follow their own statutory guidance. However, as the President acknowledges, the security services are not subject to PACE (see at [50]). Nor, as highlighted above, are they subject to Section 11, Children Act 2004.

Clearly a conversation is pending about the requirements of the law and the interaction of law enforcement agencies with vulnerable children in the care of the State.  This is a discussion in which community care and children's rights practitioners might wish to be involved.

The President highlighted the fact that there was a lack of clarity in the law on the matter and provided guidance on police/Security Service interactions with children who were wards of court. He concluded that there was no principle or rule that judicial consent was required before the police could interview a ward of court. There was a pressing need for para 5 of PD12D to be considered as a matter of urgency by the Family Procedure Rule Committee. Samantha Bangham, Familylaw.co.uk 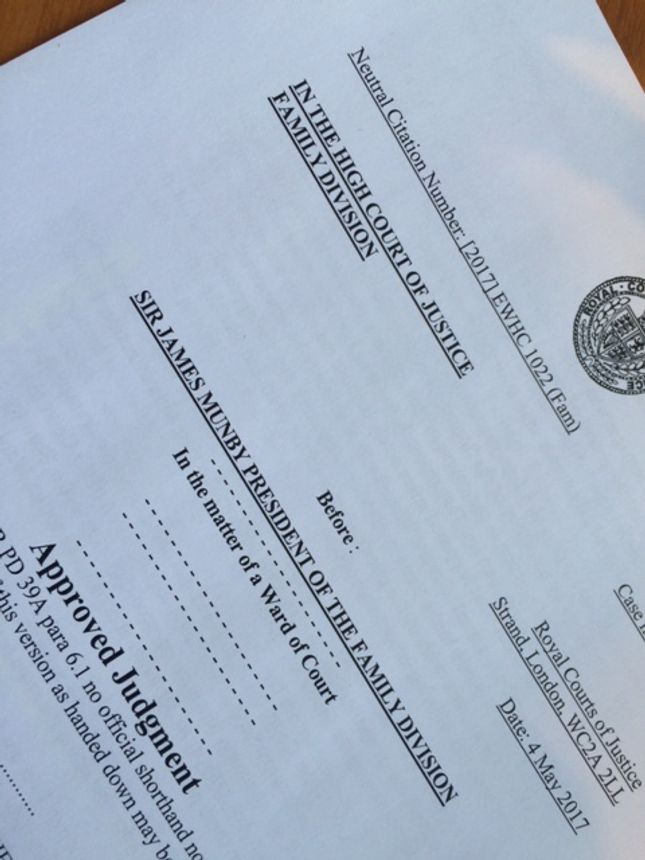